When the whole mystery wraps around 6 famous possible murderers, the storytellers needed to give an awful lot of plot rollout to someone else. Thus Wadsworth the loyal butler gets to drive. The entire film. Even when no one knows what’s going on, he is still the voice of reason. And when you need a charismatic Brit to carry the weight of nearly an entire 90 minute romp, you can only call one man: Tim Curry. 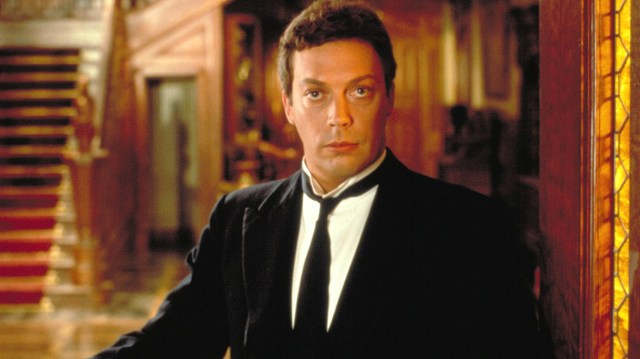 Twenty years ago, I was spending the night at my aunt and uncle’s house. I couldn’t sleep and would always end up channel surfing with my uncle Ken. He stopped on a movie channel playing some old movie. “Oh hey, Clue!” he shot. “Clue? Like, the board game?” I asked. My seven year old brain processed it the same way everyone’s brain does. “That’s stupid. You can’t make a movie out of a board game!” “Oh no, this movie is awesome. Just watch it,” he assured.

Watching him now, I am blown away at his ability to capture “slow and mysterious” at the beginning of the film. He is totally in control of the dinner party and, by extension, the film itself. He is so damn creepy introducing us to the set up. Chewing up all of his tension building exposition. And I mean really chewing. His pronunciation of the “No” is a prime example. We’re left with a sound more akin to “Nnnuhhhhh”.

He physicality is astounding too. The hit to head from the candlestick and collapse thereafter. Slamming himself into the locked Lounge door. Spraying himself with the shower in the dark. And as this farce unravels, so too does his character, leading to the reason why I, and I’m sure most of you love this movie: The Endings.

It starts with a bold claim: I know who it was and I will show you how. I’ve seen the movie a dozen times and I never get tired of watching a man drag 6 people through a house and almost SINGLE-HANDEDLY RE-ENACT THE ENITRE FILM. It’s truly movie magic. They way he nails the fine details (like only slurping soup when talking about White and Plum) and voices (“I had to stop her screaming!”) to the surprising reveals (falling out of the refrigerator). 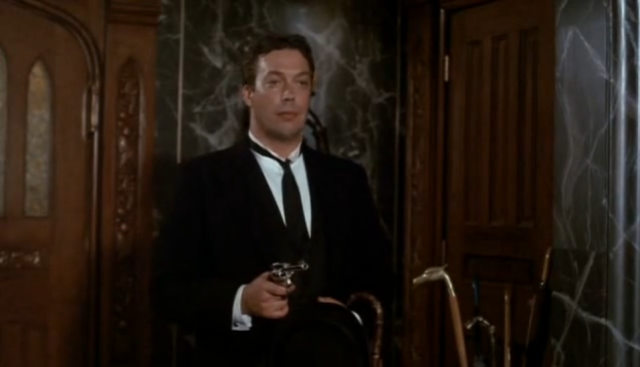 My favorite conclusion is the third and arguably the “truest” ending. The twist that he was Mr. Body and had swapped places with his own butler to trick everyone into murdering their own informant was the satisfying conclusion we all needed. Watching Curry twist into the true villain is a delight and his on screen death classic.

He is given an incredible amount of work to do. And thankfully (for us) he was more than up for the task! Good show, old boy.