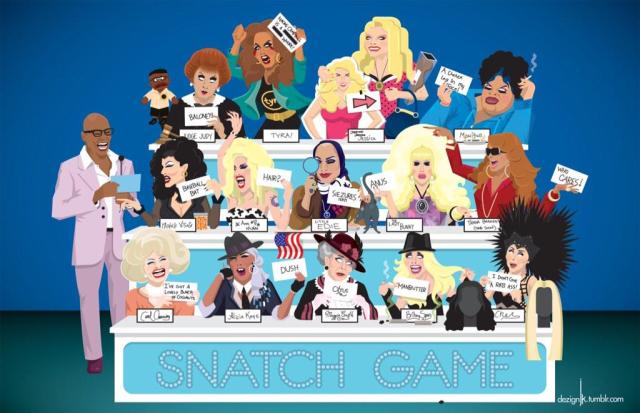 The challenges on RuPaul’s Drag Race don’t just serve to eliminate the queens lacking the charisma, uniqueness, nerve, and talent it takes to be America’s next drag superstar, but they also push the contestants outside of their comfort zones to illuminate new shades to the queens that we otherwise might never see. Today’s installment of The 8 Days of RuPaul’s Drag Race is going to showcase the ones that have been the best at doing just that, with some outstanding favorites thrown in as well.

Recurring challenges like the Snatch Game, Reading is Fundamental (never better than Jujubee’s above performance), and my personal favorite Everyone Loves Puppets are inelligible, though season six had probably the best round of all three.

So what gave the girls the best moments to shine?…

This post-apocalyptic runway challenge has already gotten a few mentions already here on The 8 Days of RuPaul’s Drag Race, but it is legendary for its highs and lows. It launched Sharon Needles right to the top of all-time favorites with her blood soaked high fashion zombie and, well, you remember Jiggly’s microwaved potato. This is also the kind of challenge where queens can stand out with their own unique reference points, like with The Princess’s vibrant and polished water apocalypse look.

Oh No She Better Don’t!

Sometimes the show just gets the balance right like with this rap challenge. The queens were pushed outside of their comfort zone, had to reference a specific era and musical vibe, and were given enough room to let their own personalities shine. As if Adore Delano hadn’t already charmed the audience into submission, here she took home a win for the challenge perfectly suited to her gifts.

Remember when the show had intense design challenges like this? Those days are long gone, but look at the results that came from them. You would think that today’s younger DIY queens would have the spark of inspiration to get close, but the recent sewing challenges have never been this exquisite.

Ongina’s effervescent charm got her a massive win (one week before going home, unfortunately) in this MAC infomercial challenge to raise HIV awareness. However, it was Ongina’s runway reveal of her own battle with HIV that made her an unforgettable queen (in the most forgettable season, at that) and became the show’s first brush with something deeper than fashion and shade. A benchmark moment for the series, indeed.

Because Christmas is the best and Christmas drag queens is even better. If you need a better reason, take a look at the wide range of fashion inspirations and interpretations – especially with Raja and Manila Luzon setting the high fashion bar for season three right out of the gate. A Christmas challenge also allows for a Kwanzaa moment and a Virgin Mary – where’s my Hanukkah though?

Puppies!! The end-of-the-season ball challenges are growing less ambitious in recent seasons, but this one threw an exciting element into the mix. The dogs selected were challenging from a fashion perspective to draw inspiration from, and the different categories (including daytime dog park realness) tied together well while showing range for the queens. Also PUPPIES!!

Here is one of the best episodes for striking the perfect balance of difficulty, personality, camp, and drama. The children’s show challenge hearkened back to the subtly subversive shows like Pee Wee’s Playhouse (or Spongebob for you whippersnappers) while pushing raunchy humor of its own. The results also give you the prototype of all judges critiques and complaints: boy drag, getting lost behind a character, lack of polish or professionalism.

You’ve probably noticed a lack of season seven challenges and that’s because you probably also noticed that the season seven challenges were abysmal. This runway theme was one of the brightest moments of that season for it’s consistent hilarity and cleverness. It also gave us the Kennedy Davenport “after a long night of hooking...” moment mentioned in the Guiltiest Pleasures post, and for that we are eternally grateful.

How we’ve gone so far into The 8 Days of RuPaul’s Drag Race without showing some love to reigning whorespondant Willam remains a mystery. She mightily won this Pride-themed challenge with a heavy hand of self-appreciation and showed off her best asset: that unwavering wit. Having the queens design something other than a piece of fashion always showcases their ingenuity, or lack thereof – we see you, Milan.

As if Draggle Rock wasn’t already fabulously jampacked, this mini-challenge (the only one on this list) was also a stunner. Designing children’s mannequins into junior beauty pageant contestants is already loaded with easy possibilities for humor, and the queens delivered mostly. Then you have Lil’ Pound Cake, Alaska and Lineysha Sparks’ foul mouthed and aggressive spawn – one of the most uproarious moments in the show’s history.