Nicolas Winding Refn has traded in the usual machismo for his newest effort The Neon Demon but that doesn’t mean he’s also giving up his penchant for violence. Set in the Los Angeles modeling world, Refn doubles down on the seedy to explore how the industry turns women to cannibalize eachother (in this example, literally). The film’s success is somewhat measured without the smarts to make its plentiful interesting ideas really resonate. Like many provocations, this one may be more interesting for the discussion it creates outside of the film than in its own confines.

Elle Fanning is Jesse, a new talent lying about her age and finding absurdly instant success. Demon relies heavily on the actress’s always natural charisma to embody a purity that it ultimately deceives once she becomes like her fembot competitors (Abbey Lee and Bella Heathcote, both appropriately vacant and pitch black hilarious). Jenna Malone’s performance as the makeup artist growing increasingly attached to Jesse is the highlight – not just game for the film’s most exposing and shocking elements, but deftly handling huge and bizarre character shifts with complete ease.

The film is entrancing and evocative, like an evil younger cousin to A Bigger Splash and its shared themes of glamour deceiving a questionable moral compass underneath. But the film can only pull you in so deep before its passive elusiveness pushes you away towards the film’s conclusion.

Refn fans scared off by the pretentious indecipherability of his previous effort Only God Forgives can be at least somewhat wooed back now that he sticks to a more accessible structure. By sticking a more tangible storyline, the bones of the film allow for his flashier instincts to actually impress and for more thematic extrapolations to take hold. The third act is where his more nebulous impulses get the better of the film – particularly as the focus is pulled away from Jesse – and becomes a morbid tone poem of unclear motivations and actions. I’ve never experienced a film so sharply losing me only to full-stop get me back on board in its very final moments.

Demon is quite a nasty piece of work but unlike Forgives its extremity is at least intended in examining a cultural insidiousness rather than simply glorifying the violence. The problem here is that he’s skewering an industry that’s hardly revolutionary to satirize, and the attempt to make broader statements of the patriarchy’s evil ability to pit women against one another is flat until the violence begins. As unpalatable as its more vapid moments are, Refn uses that mental and moral vacancy intentionally to an almost numbing affect. The audience becomes complacent to the shallowness until everything becomes all too strange and twisted to take sitting down.

There are provocations aplenty in the film’s back half, but seldom are they shocking for empty reasons. In fact, it’s refreshing to see Refn finally gain some wit to go along with the moody disposition. Demon is as much David Lynch midnight movie as it is an extended perfume ad, with the upsides and downsides of both in a gladiatorial fight to the death from all four sides. Too bad that Refn has yet to develop the storytelling skills of Lynch’s labyrinthine and allegorical work – it’s not that Demon is incoherent, it’s that it lacks a clarity of vision to bring its many diversions into a solid whole. 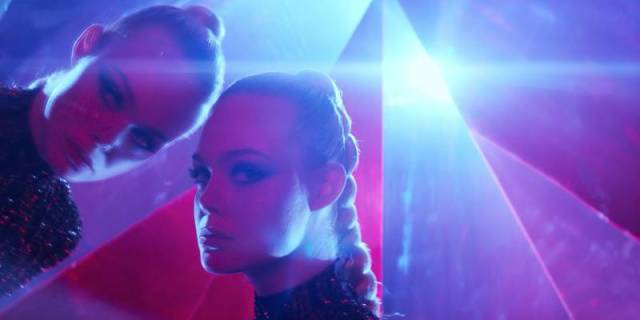 Beyond the directorial attempts, the film’s craftsmanship is immaculate. Refn regular Cliff Martinez has his strongest work with the auteur yet, his pulsing score becoming the best embodiment of the enticing and devilish world to which Jesse submits herself. Natasha Braier previous brought surprisingly colorful dexterity to The Rover and her work here should only increase her profile with emerging directors. Braier creates a neon world indeed in a mobile color palate and disquietingly stoic frames, and Refn can thank her for both the film’s plentiful iconography and sustaining the intrigue in it’s floppier moments. She is definitely one to watch.

For the patient and unqueasy, The Neon Demon is a gorgeous summer diversion of alluring craft and unsteady storytelling. Refn is somewhat improving on not falling prey to his weaker fascinations while still delivering on the sensual experience we desire from him, so consider this a step back in the right direction.