Doctor Strange is about the kookiest, gleefully… well, strange film that Marvel has yet delivered to the masses. But while its dizzying visuals and doofy world-making delight in their abandon, its stylistic risks are somewhat dampened by not stepping a single toe outside the Marvel origin formula. Here The Ancient One isn’t just Tilda Swinton’s whitewashed character, it’s also the age-old narrative blueprint. 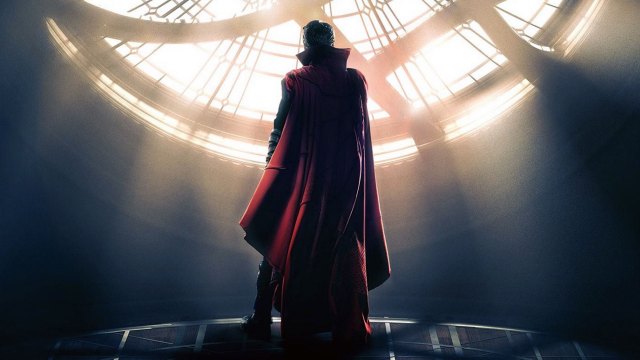 Yes, Strange is exactly the superhero origin story you have long since tired of being retold. Doctor Stephen Strange (Benedict Cumberbatch) is an ego-maniacal surgeon whose prowess is defeated by his own hubris and pride. His path to redemption goes builds across an inter-dimensional mystic battle as he gains time-bending and globe-trotting gifts with the help of Swinton and Chiwetel Ejiofor’s sidekick Mordo. Cut and paste a few minor details and you know exactly what this thing is going to throw at you.

But that lack of freshness is made up for with a pure sense of fun that has mostly been missing from the genre for too treacherously long. The film is a bit of a gas, especially in its kaleidoscopic visuals and impressive visual effects – even if they are so overly ambitious as to be truly confusing as to what you’re looking at in more than a few moments. But the spirit of the film is one that Marvel greatly needs in its universe, unseen recently since Guardians of the Galaxy and the first Avengers. Funny that – Strange actually aims to give you a good time without the gloom and doom and it delivers.

Aside from its cliche story beats, its biggest downer comes from the uncharismatic  and miscast Cumberbatch. For a film that’s working so hard to give you a good time, Cumberbatch is a flat presence almost always flailing to land a punchline. It’s a role that’s suited to his weaknesses as an actor and can’t district from the film’s adherence to formula that his Marvel cohorts like Chris Pratt and Chris Hemsworth have done. While Strange is bursting with thankless work, from Rachel McAdams love interest to Michael Stuhlbarg’s rival surgeon, Cumberbatch nonetheless bring the least to the table. Thankfully Mads Mikkelsen is a minor improvement on Marvel’s villain problems, thanks to his effortless presence.

For the inevitable return of Stephen Strange in future Marvel installments, whether in his own sequel or the Avengers’ behemoth ensemble, some work will have to be done on either performance or narrative creativity to justify his presence as more than mere diversion. However, his cinematic introduction has more than its share of fun to go around and provide an entertaining night at the movies. Doctor Strange pays off if met with limited expectations.