Playwright Cory Finley has a mild writing/directing film debut in Thoroughbreds, a teen anti-romp in upper class psychopathy. Two former friends, Amanda and Lily, are thrust together in awkward circumstances and the tension quickly devolves into a codependent antisocial bond. There’s an only fleeting sharpness to to the film’s edge, an obviousness to sly shrug it greets its punishments. You know, like murder and stuff.

Olivia Cooke plays the numb and sociopathic Amanda, newly rejecting all of the feelings she’s previously performed for the sake of normality as she awaits trial for animal cruelty. Anya Taylor-Joy is more coiled and less revealing as the performatively tailored Lily, revealing a perverse curiosity for the darker elements Amanda allows her to enjoy. It’s a match made in wealthy suburban hell doomed from the offset, with the unfolding compelling because of their dynamic at play.

Thoroughbreds functions best as a dry wit vehicle for its spry leading duo. Olivia Cooke’s crackling dullness plays an inspired catalyst to Anya Taylor-Joy’s buried grimness. The chemistry between the actresses is often the film’s most surprising element, a freshness greatly needed for the film’s labored sterility. On Finley’s page these women are largely uninteresting, but Cooke and Taylor-Joy lend the film a spontaneity and unpredictability all their own. These Next Big Things prove such monikers apt for how they have elevated this material in particular. 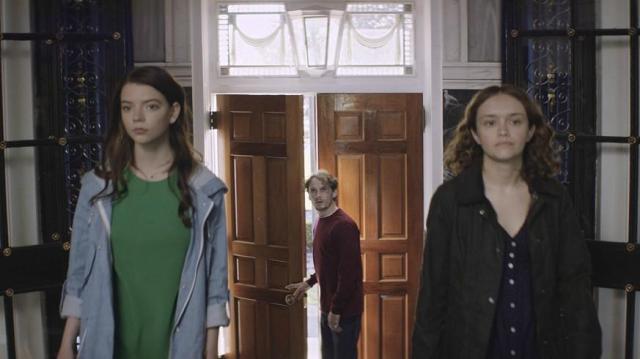 While its stars are engaging – including the dearly departed Anton Yelchin as a worn and weary local criminal and Paul Sparks as Lily’s mechanically cold step-father – the film is on the anemic side. The narrative thinness exacerbates the emptiness of the film’s stylish flourishes, turning this debut into another “style over substance” cliche. It doesn’t know that such films are best as intentional trifles, or that its bites doesn’t add up to a meal. By its conclusion, Thoroughbreds is performative in the ways that Amanda rebels against, posturing for posturing’s sake.

Irony is the film’s intended trade, but the ultimate unexpected element is how the film does reveal a complex sadness to both of these young women. These nuanced unexpected moments provide some vibrancy to the film’s quickly established but seldom enhanced tone, but aren’t examined enough to make Thoroughbreds transcend its heavy emphasis on stylized mood. With some rueful laughs along the way that allow for some fun in its darkness, it rapidly becomes a lot of just one texture.