In a year where so many films have plumbed the depths of dire mental health to visceral effect – Annihilation, Tully, and even Hereditary – perhaps the most punishing of them all is Paul Schrader’s First Reformed. Placing us squarely into the devolving headspace of Ethan Hawke’s tormented priest, Schrader’s film is a battering ram to the body and the spirit. But where those other films gaze into the abyss and find some semblance of an answer, First Reformed finds only deeper and deeper emptiness. It’s grim stuff, but it’s also convincingly profound. 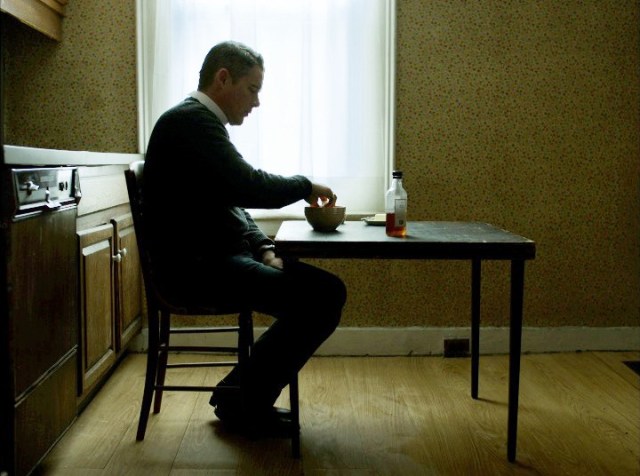 Hawke is Reverend Ernst Toller, a late-career priest called to the church after the death of his son and collapse of his marriage. Serving over an aged church overseen by a megachurch, his uncertain footing is thrown by Michael, a parishioner obsessed with the ongoing fatal implications of climate change. Toller becomes confidant to Michael’s wife Mary (subtly played by Amanda Seyfried) as he takes on the psychological burden of Michael’s concerns. Toller’s internal crisis, not of faith but of hope, spirals him towards what will be either his undoing or his salvation.

The film is a taxing audience experience, but one that refuses to allow us to distance ourselves. Schrader is nakedly influenced by Andrei Tarkovsky and Robert Bresson here (and slightly to its detriment), creating a visual experience that is at once meditative and confrontational. It’s a more daring dose of empathy, one that demands compassion when you know it will only causes more pain. First Reformed hurts and rewards in equal measure, but not until you are willing to wrestle with it.

That push and pull is embodied to heartbreaking effect in Ethan Hawke’s crushingly exposed performance, a peak in his still underappreciated career. Watching Toller collapse silently is a high-tension showcase in Hawke’s deceptively complex hands. The actor is one of our most natural screen presences, something the film uses to its benefit as it asks him to freeze himself. His Toller is a shell, convicted but conflicted, a dying light that might burn down his surroundings with himself. The actor simply exists in all of Toller’s deafening anxieties, revealing his internal suffocating soul while barely moving a muscle.

First Reformed is a meditation on existential despair, and quite unflinching in its dive into the deepest reaches of our human concerns both contemporary and timeless. But while it makes for a tough sit, its keen insights are fearless in reflecting what we are afraid to approach, the things that ail us that we dare not speak. Its humanity is the hardest won, as unearned and yet granted anyway as the grace Toller believes we have strayed.

Formally gorgeous and daring, Paul Schrader has made his most personal film, a cry into the dark that he walks us through – perhaps not into the light, but right into an acidic truth.