2008’s Mamma Mia! was somewhat defiant in its shrugging off of the demands of self-serious audiences, presenting an escape from the evils of mundanity, logic, and pretension. It wasn’t something to wrap your head around, for in its haphazard lunacy it delivered tenfold precisely the ecstasy that its audience requested. Now ten years later, such escapism isn’t a mere trifle but a necessary antidote to ensure our sanity and survival. Mamma Mia! Here We Go Again, its slightly more sedated sequel, is like a soda administered during a diabetic collapse. 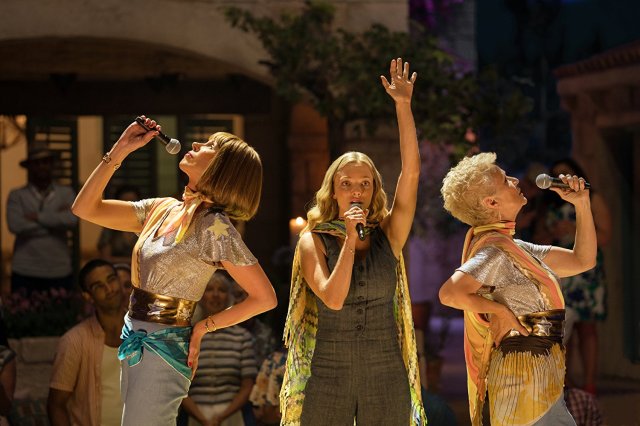 This go around is more somberly plotty and focused than the simple party or the original. Meryl Streep’s Donna has died and her daughter, Amanda Seyfried’s golden vocalled Sophie, in on the eve of relaunching Donna’s newly renovated Grecian hotel to preserve her mother’s dream. But the larger thrust of the narrative is a flashback to Donna’s arrival on the island, including meeting the Sam, Bill, and Harry who notoriously each could be Sophie’s father. What plays out is a surprisingly moving romp with a heavy heart with an eye on legacy and finding one’s purpose. And of course, a slew of high octane ABBA goodwill.

Unlike the first film, this effort (with director Ol Parker replacing Phyllida Lloyd) takes much of the first act to find its groove, perhaps a little thrown by balancing the film’s sad underpinnings. However, the film is more of a lesson in sticking the landing than maintaining a high. Sophie’s timeline, no matter how heartbreaking, is the fresher and narrative than the more dull happenings with Donna’s flashbacks, but both timelines cohere warmly by the end. The final half hour of the film is nothing but emotional payoff in the glorious extreme: uplift, tears, and the arrival of Cher as Donna’s estranged entertainer mother.

It can’t be understated what an oasis it is having Cher back on screen. She’s having even more fun than anyone in the audience.

As the young Donna, the previously muted Lily James is a vibrant new musical hero. She recalls Streep’s understated neuroses and earthy charm, but even more crucially plays congruently to Seyfried’s musicality and screen presence. James’ charisma more than makes up for a narrative that doesn’t teach us much about Donna we didn’t already know, and her voice carries the lions share of the songbook with ease. Cast her in another musical this instant.

Here We Go Again is another exercise in silliness for its own sake, perhaps more unconfidently self-aware and just a touch restrained, but also wholly rousing. Yet in that enhanced self-awareness is a knowing responsibility to soothe, particularly in dark tense times. The stakes of this sequel are all internal and quite personal, with Donna self-actualizing her own destiny and Sophie discovering her mother in herself. It’s a film about finding a safety net that is itself a safety net for a weary audience. Even the rehashing of songs and gags from the original is its own kind of salve.

And why shouldn’t a musical farce set to be ABBA use every tool it can to delight us? Christine Baranski mutters under her breath about her beating vagina. Air instruments are played with baguettes. Flowing silk is everywhere, and its ends with tears both happy and sad. See it with a crowd and sneak in a bottle of wine.