Some might be quick to call BlacKkKlansman a return to form for American auteur Spike Lee, but the film arrives with the conviction of a storyteller who never left in the first place. Which he truly is. Over twenty narrative features (in addition to documentaries and television) and he’s never taken a break from studying the micro and macro of race in America in works alternating between esoteric and accessible. But maybe the distinction is being made because after this extensive career, Lee delivers something to nearly match his most beloved works for their urgency.

Its true story is at once too wild to be believed and just crazy enough to be conceivable: John David Washington stars as Ron Stallworth, the sole black detective in the 1970s Colorado Springs police force who infiltrated the local Ku Klux Klan. What begins on a spontaneous action, Stallworth heads a task force that ultimately has Jewish fellow detective Flip Zimmerman assume his identity and makes contact with grand wizard David Duke. Adapted from Stallworth’s book by Lee and a screenwriting team of Charlie Wachtel, David Rabinowitz, and Kevin Willmott, if BlacKkKlansman were any more real, it would be fictional.

Lee examines as many avenues for the film as he cohesively can muster, flirting with blaxpoitation genre affectations while remaining grounded in grimy backwoods reality. What becomes a film largely spent in the company of white supremacists, crucial time is spent with young black revolutionaries, particularly the divine Laura Harrier as Stallworth’s new girlfriend and college intellectual Patrice Dumas. Its first sparks of life come from a sequence where Corey Hawkins as Kwame Ture give a speech to young black organizers, edited with an emotional intelligence that prevents the ensuing action from having impersonal, disconnected stakes. The film’s tonal constant is the brilliant Washington, giving confident comic timing and no-bullshit charisma to match any recent star-making performance.

Key on Lee’s sights is passive allyship, particularly as embodied by Adam Driver as Zimmerman. His latent Judaism is challenged by Stallworth, with his privileged inability to initially see equal threat in a common enemy becoming one of the film’s most essential talking points. As some in the internal bureaucracy of Stallworth’s police unit work with or shrug off the Klan, Zimmerman’s sudden proximity to danger make him realize he has always had skin in this game partly out of his control, but mostly which he could mute as it would suit him. Driver is nuanced with this awakening, thawing into an exciting chemistry with the unflappable Washington.

Because the film largely functions for the widest possible audience, it sometimes needlessly reaches for obvious reflections of our current political environment. Trump is not invoked by name, but as a worst case scenario shrugged off with gut-churningly familiar disbelief. These moments stick out so sorely for being unnecessarily pat on ideas it makes crystal clear already – it’s already reflecting a hell outside the theatre we cannot escape, and strangely doubts our ability to see the similarities.

All of the film’s heightened prescience makes for a sometimes surreal viewing experience. Lee bookends the film with a garishly theatrical prologue with Alec Baldwin and an epilogue of true life footage ripped from the headlines, as if everything in between exists on a spectrum from satirical artifice and empirical truth. The klansman it depicts are buffoonish slapstick caricatures still quite capable of grave menace, its trickiest narrative balance it has to strike. While some of those scripted moments nakedly reach to draw contemporary parallels, the film more powerfully does so when examining the very real threat within American freakshow, dumbass villainy. 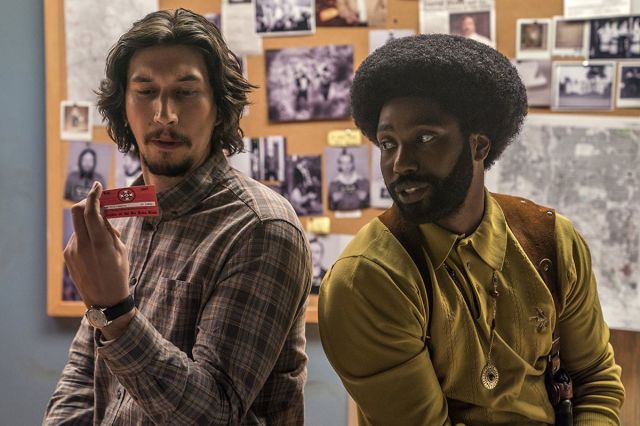 The bizarre factor is maybe highest in Topher Grace’s affably sinister performance as Duke. Grace uses his natural generic quality intelligently, projecting a Duke that uses plainness as the vessel for incendiary ideas and dispenses hatred with punishing casualness. As with his minions, the real evil is embedded beneath persona.

The film is most powerful in its discussions of racist imagery and their impact, with an extended passage reserved for D.W. Griffith’s The Birth of a Nation. Here Lee condemns the cinema itself and the stories we tell, what corrosiveness white history has been willing to allow for the sake of building its own dominating history book. Narrative is a responsibility that has been taken advantage of by both the complacent and the oppressive, and Lee wants to dismantle the overt (even if it means indulging in farce) in order to shake those accepting of status quo by the shoulders. BlacKkKlansman’s most pressing thesis is of immediacy, the dire need to get today’s history book right.

With BlacKkKlansman, Spike Lee has once again pushed the formative limits of mainstream filmmaking. Delivering something for the masses with a verbose cinematic language and sociological depth, it is more cathartic for its simple existence than providing much insight into the legacy of institutionalized American racism. Its wide reach and audacity still produce the best possible result: it catapults you into action.