Remakes seldom come with as much Hollywood heft as A Star Is Born. Carrying a legacy almost as old as the cinema itself, this new version comes with its own added baggage of risk: it’s the big screen debut of global superstar Lady Gaga as the eponymous emerging talent and Bradley Cooper takes his first singing role and takes on his first directing duties. But none of that pressure can be found on the screen. Instead, this update of the classic love story is crafted with a palpable affection and passion. Cooper’s take is personal, ingenious, and raw.

The actor (and now skillfully proven director) Cooper stars as Jackson Maine, a fading country rocker lost in his bottle of gin and history of family pain. A drunken wandering into a drag club puts him in the spotlight of Lady Gaga’s cabaret singer Ally, who has long given up bigger hopes after being dismissed offhand for her looks. But Jackson is taken with her musical gifts, perhaps sobered by them or at least distracted. When he provides her with the platform that has eluded her, her fast upward trajectory finds his powerlessness to addiction steering him in the opposite direction.

Much of what makes the film such an investing emotional experience is the rewarding, organically rendered onscreen chemistry between Cooper and Gaga. The first chapter of the film skews closer to something like Richard Linklater’s Before trilogy than a standard rock musical, forefronting the relationship between Ally and Jackson and their personal heartaches. By providing us with the foundation of their background and mounting feelings for one another, Cooper provides us with yet another entry point into the musical process, inviting us into the full spectrum of the song by living in its impetus.

This culminates in the live performance of “Shallow”, a power anthem where Ally and Jackson reflect their curiosity for one another’s ails and the quaking ground beneath them as the fall for one another. Captured by powerhouse cinematographer Matthew Libatique, we’re placed uniquely on the stage rather than in the crowd, in the singers’ hearts rather the consumer side of their creation. We live the melody as they discover it and it’s wholeheartedly moving in ways that most musicals (and Cooper’s director peers) should envy.

It’s a high bar of artistry that the film sets remarkably early, much how George Cukor’s version uses Judy Garland’s towering “The Man That Got Away” in its opening act. And what follows is a noticeable downshift that’s both unavoidable and important to what Cooper really wants to do with the material. If the pacing lags and its perspective on the music industry becomes more clunkily cynical, the human element deepens as it focuses on cycles of addiction. Don’t call it the b-side; the second chapter plays like a deeper, more soul-baring album (with that dud mistepping track or two).

While the back half of the film loses Ally in order to focus on Jackson’s demons, it means we are served Bradley Cooper’s finest performance to date. The actor has become one of our key storytellers on stifled heterosexual male pain and this is the pinnacle. Opposite the exceptional Sam Elliott as Jackson’s watchful older brother Bobby, Cooper shows Jackson’s long dormant issues to be protected by persona, his vocal affectation a mask and his lyrics a mantra that has lost it’s meaning. He is alternately fascinating and heartbreakingly real. “Maybe it’s time to let the old ways die,” Jackson sings, with Cooper giving this signature track an air of mechanical resolve, and a ghostly significance that hangs over the man’s inevitable tragedy.

And he has found a rigorously authentic screen partner in Lady Gaga. She stands (seemingly unfazed, miraculously) in the shadow of Barbra Streisand and Judy Garland, but her natural presence and surprising wit reminds of the 80s cinematic heyday of Cher or the casual real-world intensity of Marisa Tomei. Ally never merely performs her emotional songs, but Gaga takes us simultaneously through the song’s journey and Ally’s as well. “Shallow” owes much of its emotional weight to the complicated layers of fear and desire she infuses into her arrival on the stage. She gives us a broken spirit rebuilding itself before our eyes, no small feat indeed. 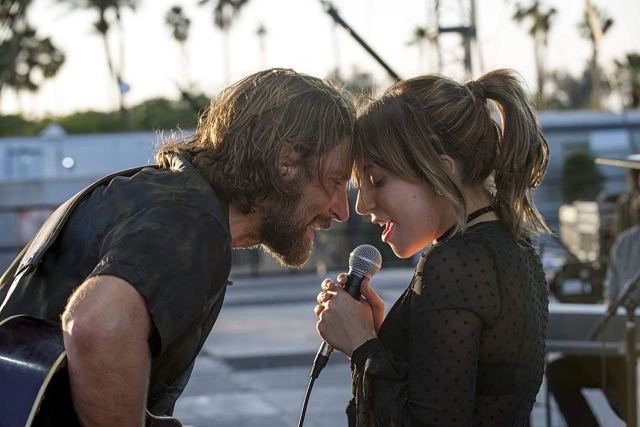 You want more of the actress when the film kind of forgets about her, and when she returns, the singer reemerges as a natural, sparring unflinchingly with Cooper to bruising reality. But the film soars highest when their chemistry becomes the showstopper, whether in the film’s many glorious songs (“Always Remember Us This Way” is another, albeit brief killer) or its equally thrilling extended dialogue scenes. It’s a relief to watch a film that knows what a movie star is and how to treat its players as such.

Bradley Cooper’s A Star is Born is a piece of heavy studio machinery with real soul, avoiding the trappings of cash-in rehashings for something magical. It is heart-on-its-sleeve filmmaking that doesn’t skimp on psychological intelligence or believable characterizations for the sake of its romance. If anything, A Star is Born has a leg up on modern musicals for its emotional intelligence about the pain and longing that makes a song fly. Even at the expense of the singer.