Vice arrives on the screen in a haze of dorm room pot smoke and farts, the kind of conceptual satire brewed up and whiffed out by dudes confusing vacuous provocation for sociopolitical sharpness. But the film’s larger problem is the self-awareness it lacks to see how its own gauche glibness bends closer to the boys club point of view of its demonic subject than it intends. The film belches ill-conceived sketches at us, guffawing at its structural somersaults as it depicts the wheel-turners of the Bush administration creating irrevocable circumstances both immediate and reemerging. Skewering is not enough to excuse how Vice renders some of the most dangerous people of our era into cartoons, resulting in a film grossly stooped in privilege, a film that wants to have its dumb cake and eat it too. It’s torturous, audience-hating claptrap.

The film follows the first rise and later reemergence of Dick Cheney, detailing him as a sleazy player in the Nixon years that left politics before taking grimly consequential advantage of the vice presidency under George W. Bush (played vaguely by Sam Rockwell). Christian Bale stars as Cheney, coiled into inertia as the famously reserved politician for one of his more flat transformations. While the lesser known early years of Cheney are among the film’s dullest passages, his strategic slithering in the Bush years finds the film at its most affected and ghastly. Its portraiture is intentionally hideous, sure, but Vice is also formatively and ideologically so in ways the film neither intends or prevents.

Vice obliterates essentially everything in its path, which is saying quite a bit considering the many elements at play here. Amy Adams as Lynne Cheney is asked for histrionic swings that belittle her nuanced gifts, like a poorly directed and less convicted version of her true-believer wife in The Master. Historical context is eschewed in favor of needlessly labored reaches for prescientness that we already infer. Details are rushed to make room for more quacking vignettes with no payoff, Michael Moore gets ripped off, and, at Vice’s worst, the dead are shrugged off with the ease of Cheney himself.

Just as writer/director Adam McKay did with his previous effort on recent American history The Big Short, Vice is scattered with vignettes and flourishes that both condescend to the audience’s intelligence and sense of humor. We get Lynne and Dick going literally Shakespearean, a Fox News treatise told in the very style of Fox News, and an eyeroll midpoint jab at biopic movie machinations. The film anchors itself with the distant nephew of Cheney’s that provided his eventual heart transplant as its narrator. There is a fundamental tastelessness and lame obviousness here, serving us first-draft concepts that it is robustly, foolishly proud of itself in ways that suggest little more than cockiness from McKay’s creative vantage point. 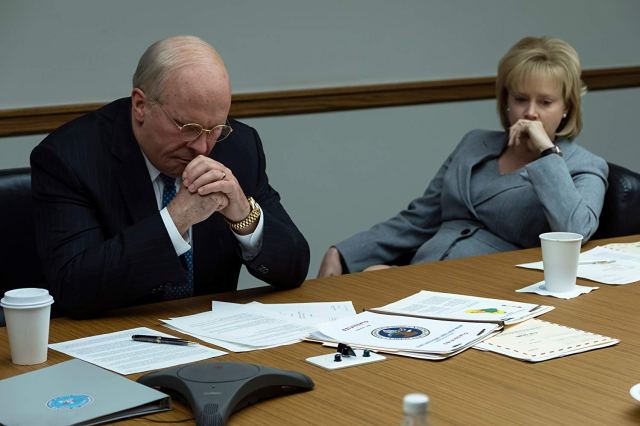 It’s not that the film asks us to laugh at these people – they were as worthy of jabs at their backwardness as any. But Vice is a movie that asks us to find humor in their worst maneuverings with the most severe implications, and that it’s slick fun to do so. It’s a revisionist history that assumes we took everything Cheney created while sitting down, all while having it both ways by slapping us for complacency that isn’t historically honest. It’s also a movie that thinks we are dumb enough to not know who Antonin Scalia is, laboring the most mundane details and skimming the potentially illuminating nuance.

Whoever Vice intends to be its audience (it remains a mystery who this movie is for except for self-satisfied bros), the film certainly thinks that they are all ripe idiots. It brings no joy to detail how ugly it is ideologically and formally, how it turns its rage at Cheney and the Bush administration indiscriminately outward on the rest of us, how illogically assured it is with its garish comedic bellyflobs. Vice has no idea how to read a room and doesn’t think it has to.