Period romance The Aftermath arrives to the screen like a silk-draped salve, the kind of sumptuous melodrama with the empty calories of champagne. This one comes with the genre’s chief sommelier Kiera Knightley, fraught with tragedy in gorgeous gowns, torn between two men for our cathartic benefit. But this after dinner cheese of a film is of the stinky variety, the kind that no presentation can really bring to life or save from the off-putting notes in its flavors. Luckily, and forgivably, The Aftermath doesn’t leave much of an aftertaste.

Those cozier cliches might all largely be present in the film’s austerity, but director James Kent only mines their entertainment value intermittently, leaving the story’s potential for the problematic to sometimes take hold. Knightley plays the grieving Rachael, coming to live in Hamburg with her military husband Lewis after the fall of the Nazis and the death of their son. The couple takes up residence in the mansion of Stephen Lubert and his resentful daughter Freda, away from the city’s more open hostility to the British forces.

As physical distance proves no difference to the wedge between Rachael and Lewis, Rachael begins to fall for the equally broken Lupert. But uncertainty and paranoia shrouds Lewis’ perception of Lupert as tensions rise among the Nazi-sympathizing German locals, including a young boy who has captured Freda’s affections and potential political fervor. It’s a straightforward attempt for audiences who love to bathe in handsome prestige – all that’s missing is the spark.

From the novel by Rhidian Brook, Kent largely flattens the film’s passions and political intrigue. While the script (adapted by Joe Shrapnel, Anna Waterhouse, and Brook) sets up plenty of contemporary concerns involving white nationalism and what personal and cultural problems come from our inability to unpack tragedy, the film allows them to lay unexplored. At its worst these undeveloped themes barely escape dangerous “both sides” mentality, and at best its a fairly rote post-WWII we’ve seen before but not the ones that have excited us. 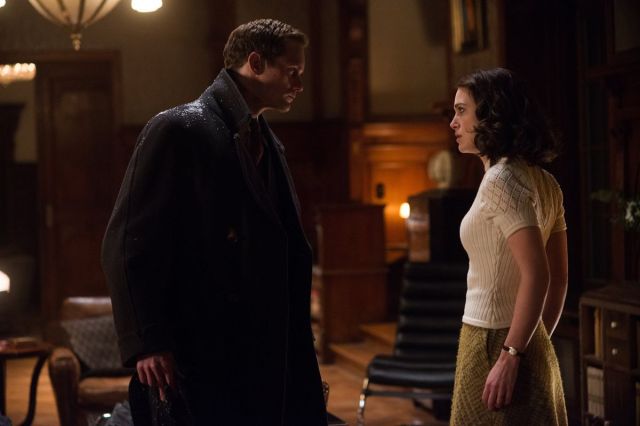 Even Knightley is left at sea in a character that is largely deferential to the turns of her male costars, both of whom fall flat. As Lubert, Alexander Skarsgård is a vacant vessel without much going on behind his stare, while Jason Clarke’s Lewis is yet another performance from the actor we have seen from him several other indistinguishable times. It isn’t ultimately pulse-racing stuff, particularly with such milquetoast screen partners opposite the typically engrossed Knightley.

One wishes the film had a stronger intuition to its characters’ tragic circumstance, or at the very least, a richer sense of what we want from a film as pristinely composed as this. Instead, it’s too complacent to be exciting or even preachily relevant, offering up the worst sin on the menu – it’s forgettable. Though well designed, The Aftermath is inoffensive but still leaves much to be desired.