After 2011’s Shakespeare adaptation Coriolanus and 2013’s look at the love affairs of Charles Dickens The Invisible Woman, Ralph Fiennes returns to the director’s chair with The White Crow. The film is a biopic of the legendary ballet dancer Rudolf Nureyev (played by Oleg Ivenko), detailing his early creative struggles and ultimate defection from the Soviet Union. But once again, Fiennes delivers a flatly watchable, if indistinct directorial effort that reveres its subject without ever really lifting off the ground.

As the film follows Nureyev towards inevitable conflict with Russian authorities, Fiennes oddly chooses to go back in time to the dancer’s fateful childhood trauma. The film’s flashbacks provide its most unnecessary stylistic cliches, changing aspect ratio and desaturating the image with an aggressive nudge to remind us that we are watching something from His Past. Meanwhile in Nureyev’s present, the film is composed with a silky finish, with cinematographer Mike Eley aiming for an almost murky Sirkian aesthetic. It’s all pleasing enough to the eye to maintain our engagement, if not ever flashed with much originality.

At its best, The White Crow allows its dance sequence to function as its most exciting set pieces, positioning them often as pivotal to Rudi’s emotional narrative without straining to forced plot mechanics. There is passion in Fiennes’ capturing of movement, and even more importantly, a confidence in allowing Nureyev’s art to tell his story.

The artist is portrayed as obsessive and self-sacrificial, subsuming his identity to dance as his life depends on it, leaving human connection as unnecessary baggage. David Hare’s adaptation of Julie Kavanagh’s biography is a literate one, with a deep knowledge of not only the passage of the dancer’s career but also his state of mind throughout. If the film seems on its face like a familiarly staggered biopic, it at least reveals its subject’s psychology in ways more intuitive and detailed than most of its unambitious contemporaries. 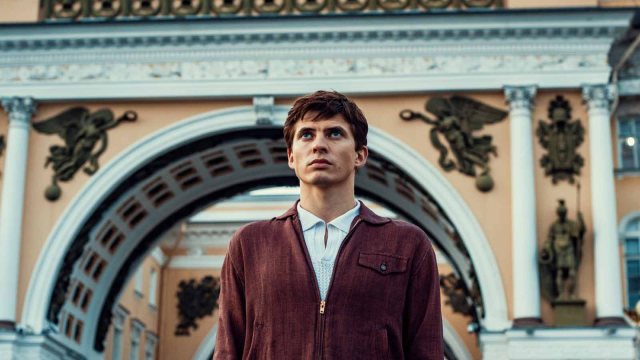 The film is ultimately burdened by the maladroit charms of its lead actor Ivenko. It’s Hare that provides the character detail, with the performer offering one of the more wooden performances of recent memory. Nureyev was admittedly a singularly focused, unforthcoming man (at least as the film wishes to portray him), but Ivenko is vacant behind the eyes and stuck in one monotone temperature. Luckily, he also shines in the dance sequences, fulfilling a sense of visual wonder if never an emotional one.

The White Crow itself is similarly composed, capturing our interest in half-measures but providing an oasis when offering another ballet sequence. Much of Nureyev’s queer journey is left to subplot, somewhat failing to enhance the particular tensions in his story. If the film is caught somewhere between inoffensively composed and mildly arresting, it at least offers some beautiful respite from much worse biopics.