In ways both conventional and not, director Abel Ferrara pivots to the biopic with Pasolini. Fictionalizing the final day of filmmaker and writer Pier Paolo Pasolini’s life with Willem Dafoe playing the provocateur, the film arrives to American audiences several years after its debut at the Venice Film Festival with a curious air of continuing examination. Ferrara may largely employ traditional true life narrative tactics for studying famous figures, but it darts in and out of the artist’s memory and creative imagination like smoke, closing on its subject with more ellipsis than finality. 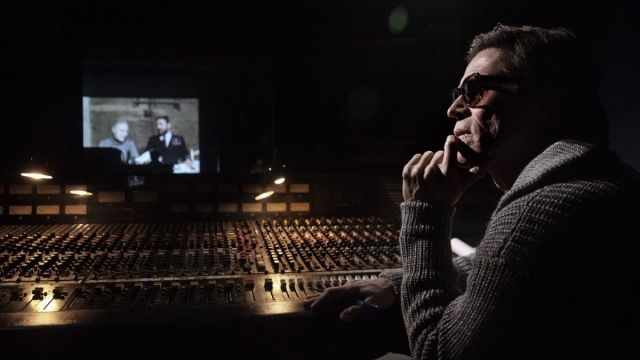 The film opens as Pasolini puts the finishing touches on his most enduring provocation, Salò or the 120 Days of Sodom, answering questions of his political implications with enigmatic performance. Ferrara’s approach is to meet audience expectations for his subject head-on and slowly infuse the personal. By the time the film closes with Pier Paolo’s sexually and politically implicated death, the legend is stripped to reveal the human behind the legend. It sounds more rigidly constructed and cliched than it is, but Pasolini is more spiritually serpentine than its framework would immediately suggest. It feels like Ferrara is searching for something unknown, though its unclear if he ever finds it.

What distinguishes Pasolini from other biopics is its willingness to get lost within the artist’s creative perspective while detailing his life. Passages of his writing play out on screen both to illuminate his political and creative point of view and to present an omen of his violent fate to come. And yet, despite explicit sex and an undercurrent of dread, it scarcely achieves the kind of shock definitive from the auteur’s work. Nor does it necessarily illuminate anything about the political implications of what he created.

Instead, Pasolini perhaps illuminates more about Ferrara those the veil of its subject than it does its subject itself. By examining a legend of provocative cinema, Ferrara seems to be looking for answers about his own identity as both anti-establishment storyteller and once controversial filmmaker. A wistful kinship is sensed not only in Pasolini’s functioning isolation, but also his righteousness. As the closing moments linger on the pain of those left behind by Pier Paolo’s death, the tonal desolation plays like the filmmaker attempting to grapple with what he himself may or may not leave as a legacy.

It’s a rather spiritual and intellectually verbose take, one whose meanderings vary between effective and forgivably not. At a brisk 84 minutes, the duller passages feel bent on revealing an artistic ennui, the banality of fighting uphill against the world’s strictures. The film is perhaps pointedly in opposition to the kind of fireworks an audience familiar to the director’s work might expect, particularly with the film’s surface alignment to the genre. Ferrara instead shows that the life of the daring artist is much more solemn and introspective.

Dafoe gives subtle life to the film’s quietude, lending a necessary unflashy humanity to the film, as is his custom. Where the film could feel like more of an exercise, he allows its personal textures to surface. But like the film itself, it can’t help but beg for a little more electricity to go with the submersion.