Noise does not equate to excitement, but don’t tell that to James Mangold. With Ford v Ferrari, the director takes an extensively familiar and cliched approach to unexamined industrial history. Despite a somewhat interesting subject of Ford Motor Company’s entry into the Le Mans auto race and cross-continental grudge with the sexier Ferrari, Mangold reduces the narrative to entry-level machismo pathology. Its human story, led by Christian Bale in prickish rascal mode and Matt Damon as his straightlaced compatriot, is granted consideration seldom deeper than the traditional masculine types it reverts to. Even with all the technically impressive vroom vroom (or maybe somewhat because of it), it feels like we’ve seen it all before. And with Mangold unable to find any fresh territory to speak of, it hasn’t gotten any less boring. 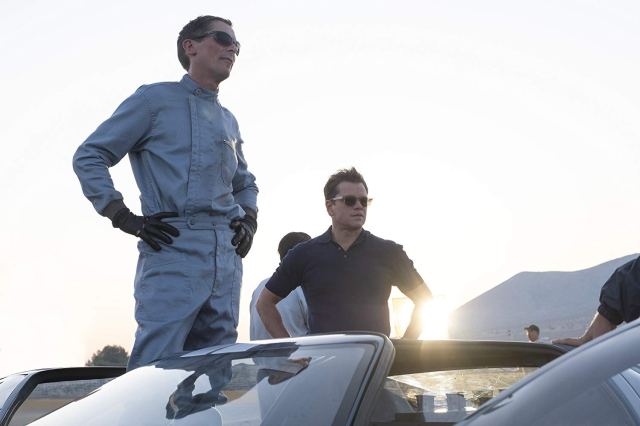 Damon stars as retired racer Carroll Shelby, one of the few Americans to ever win the 24 Hours of Le Mans and later self-sacrificially repositioned to race car designer. Shelby is recruited by a sales-dwindling Ford, then headed by Henry Ford II (Tracy Letts), to commission a racecar to topple the dominant Ferrari in the prestigious race. Shelby’s chief collaborator is his Christian Bale’s Ken Miles, a combative but intuitive driver whose abrasiveness clashes with the appearance-concerned corporation.

Most noteworthy among the film’s assemblage of rote male power jockeying is its imposing craftsmanship of throttled sound design to convey the danger of the racing sport. If the edit and Phedon Papamichael’s scattered lensing make for a somewhat logistically confusing visual experience, the soundscape does the film’s heavy lifting to create something exciting. It’s sometimes gorgeous and earsplittingly intricate, but never in service of something worth the compositional effort. It postures brawn, but is simply vacantly slick.

Something is also missing in the patchy chemistry between Bale and Damon. Each feel individually charismatic, but on their own islands when the film demands a strong connection between the two. Without this, the film feels unachored in what fuels it emotionally. Instead, we get two invested performances running opposite one another but not in harmony. Even Letts as Ford struggles to connect, despite his typically brilliantly measured infusion of humor.

Ford v Ferrari is ultimately about grudges and officious male ego, with a confused sense of what makes its heroes egos different than those who oppose them. The film equates professional cooperation with emasculation, as if the very industry the film salivates over also somehow is a villain by robbing the protagonists of their masculine individualism. It wants to have it both ways without allowing for complexity in this potentially revealing dichotomy. Finally shellacking a half-invested father-son narrative, a more human story is attempted without payoff. Never is it less than crystal clear that we have seen every bit of this before, even if Ford v Ferrari‘s version of it is slightly less toxic.

What the film suffers is what the Ford vehicles and corporate mentality lack at the beginning of the film, at least as presented by the film (the notion of Ford being positioned as an underdog despite their deep financial power isn’t just ludicrous, it’s disingenuous). It’s missing a soul.