Chinonye Chukwu has a very ambitious debut with Clemency, a film that looks to balance advocacy with a poetic delivery that gets at the soul of a contentious American issue. The film is clear in its intentions as an anti-capital punishment drama, pulling no punches in how it grimly unveils the dehumanizing facades of bureaucracy that allow it to continue. And yet the film is also deeply personal, focusing on both inmates and their keepers in a way that refuses to allow us to consider this as anything but a human discussion. It’s dead serious filmmaking that charts a direct line in blood from the political to the social to the soul. 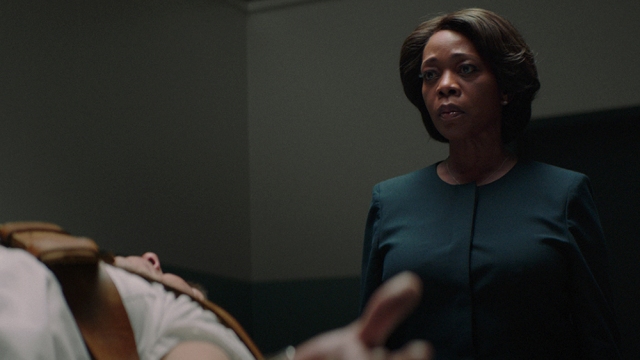 But the most accessible entry point to the sometimes impenetrably stoic film is as a prime, career-high showcase for the singular Alfre Woodard. The screen legend plays a Death Row prison warden named Bernadine who’s beginning to feel the personal brunt of her position, keeping the delicate balance between restrictive legality and policy and the humanity they frequently deny. After one execution goes as poorly as possible, her private crumbling becomes accelerated by the next impending execution, a man with little connection in the outside world named Woods (Aldis Hodge). As she takes demands from all sides including the residing administration, advocates on Woods’ behalf, and a husband urging her to step away, the clock quickly winds down on an unlikely stay of execution for Woods from an unfeeling system.

And Woodard is simply sensational. Chukwu tasks the icon with embodying a larger systemic breakdown within a fairly uncommunicative character, and Woodard meets the challenge with an incredibly specific rendering of emotional collapse. Her performance crafts grave intensity from stretches of unbearable silence, the physicality of her work hinging on the slightest physicalities projecting to us the broken woman behind the stillness. The showstopper of the performance is the film’s final scene, Chukwu boldly staring down Bernadine’s brokenness as Woodard lays herself bare before the camera. It’s one of the benchmarks of Woodard’s career and one of the most significant performances of this year.

Elsewhere, Hodge mirrors Woodard’s silent complex pathos with what feels like an almost silent performance. Danielle Brooks arrives for one gut-wrenching scene as Wodds’ former lover and potential spiritual rescue, further complicating the emotional textures of the film. Essential to the film’s human consideration is its acceptance of human imperfection, bestowing grace upon all of its characters that gets rewarded with some deeply affecting work all around.

Bernadine’s problem, as with is the film, is other people. Here is where you feel some imbalance in Clemency’s focus on advocacy: often it preaches, even to an agreeing audience, without trusting our capacity to hold multiple nuanced truths. Opposing characters such as Richard Schiff’s platform-spewing legal advisor become more constructs than people themselves. But while the film argues its compassionate, desperate vantage within the confines of Bernadine and Woods’ experience, it’s a provocative contemplation on a system’s ability to abuse the human spirit through dissociation.

There’s a morose expressionism to Chukwu’s approach to the material that will be tough for many to stomach, but carries a weight and intellectual vigor that shouldn’t be ignored. Clemency has its blunter corners, but it stares deep into the heart of an American rot, possessing an uncommon cinematic passion with incredible importance.

Clemency was screened at the 2019 Toronto International Film Festival.