As gay people, we’re acutely cognizant of nuances of perception and communication. When a portion (or entirety) of one’s life is spent forced to suppress self-expression, we become scientists of our own behavior and scrutinize how any minute tic will reveal our identity. Whether we have hidden because of social norms or for safety, the necessity to do so results in a social class of experts in subtle social interaction. The hyper-sensitivity electrifies when we meet one of our own and use these adaptive skills to acknowledge shared truths, to show compassion, to express romantic interest. The liberated YouTube generation knows nothing of the experience of not being able to speak plainly to your own camp. 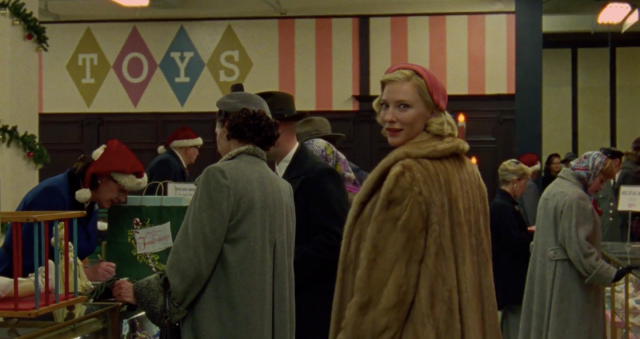 Such are the fascinations of Todd Haynes’s passionately observed Carol, a love story of stolen glances and charged embraces that is as interested in the queer longings of the central duo as it is with what remains unspoken between any of Haynes’s 50s era denizens. Rarely has every frame been so essential and packed with specific behavior in contemporary cinema, and the film is a staggering assemblage of craft that services the truth for which Haynes reaches and richly achieves. Haynes captures the breathlessness of flirtation and first touches, the cured infection of prior loves into the dynamic, the ease of feeling accepted fully. Yes, it’s relatable to anyone who’s been in love, but make no mistakes: this is a gay story, the stakes raised by the language unavailable to two women in a time where they have to hide in plain sight.

Therese Belivet (Rooney Mara) is an unimposing shopgirl whose life gets a kickstart by the intrigued Carol Aird (Cate Blanchett), a soon-to-be divorcé shopping for a Christmas present for her prized daughter. Naturally, things are complicated by Therese’s boyfriend (Jake Lacy) pushing for next steps and Harge Aird (Kyle Chandler) open to reconciliation if Carol plays it straight. The vulnerability that Mara and Blanchett bring to the lovers as they discover each other in the moment is breathtaking as Therese and Carol are by turns awkward, turned on, patient, and enamored. These women aren’t stoic enigmas, but social outliers discovering how to communicate their mutual interest without words.

Blanchett’s Carol is immaculately detailed, with adept physical precision and emotional intelligence that makes every hesitant pause or sly flirtation packed with meaning. Her performance somehow never feels over-planned, and every glance feels spontaneous and rooted in complex emotion. The unexpected chemistry she shares with Mara is reflected in Carol and Therese, two dissimilar women somehow perfectly suited. Mara often excels at playing plain-spoken straight-shooters, and her Therese is of that brand. She speaks with verbal economy that defies her deep well of passion that is plain on her ever-brightening face. Whereas Blanchett is the sly pursuer, Mara is every bit the direct charmer that Carol finds so disarming. The two actresses finish eachother’s emotional sentences in this delicate tete a tete.

Not just a showcase for the leads, Carol has one of the richest ensembles of the year. Chandler is an undervalued talent for suggesting whole lifetimes within limited screentime (see The Spectacular Now), and here he creates a whole marriage with Blanchett even as we’re watching it die. Sarah Paulson as Carol’s friend and former flame Abby is an immediate and full-bodied presence in the film. She cuts to the quick of every one of her scenes, showing as much human range as our protagonists. Her Abby is no-bullshit, whether it comes from affection or reproach (sometimes with shadows of both). She could be the next addition to the list of Haynes muses, she’s that inspired. 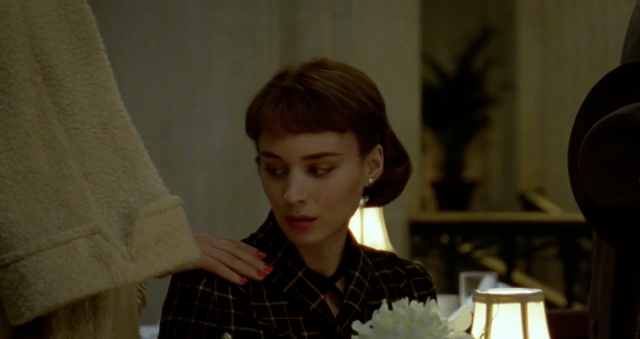 Todd Haynes is a master of examining period and how it shapes communication and images. Carol is a world where “divorce” and “therapist” are still dirty words, so forget these women having some lexicon to describe their femme leanings. Every element is squarely in his control, despite never feeling tinkered or over analayzed. Phyllis Nagy’s adaptation of the Patricia Highsmith novel (also known as The Price of Salt) breathes life beyond the confines of the romance, as Carol’s high society life and Therese’s department store day-job are as believable as the romance itself. No wonder the internet is as obsessed with this film as it is, with so many unexpectedly fresh sparks of minutia.

The design craft on display is as swoon inducing as the narrative. Cinematographer Ed Lachman films in grainy 16MM, creating a palette at once as vivid and hazy as remembering a lost love. His eye illuminates on character and narrative as the script, catching every gesture and glance. His work is in tandem with editor Affonso Gonçalves, who finds both the perfect rhythm to unfold the story and the drama in the nuance of performance. Production designer Judy Becker and costume designer Sandy Powell also provide insight with glorious period details without dipping into over-fetishization.

All of this creates a feast for this formidable team to create a film that is both wide and deep in its observations on love, longing, and relationship. A longtime maverick, Todd Haynes has crafted a masterpiece, one to be savored anew on each revisit.