Opening with a patient, glistening beauty The Zookeeper’s Wife meets its World War II subject with an earthy passion. A familiar aesthetic is nevertheless enlivened by director Niki Caro. She quickly captures a sense of awe for the animal kingdom that is particularly attuned to a certain part of our humanity, a holistic eye that carries over to the human story at hand.

At once a star vehicle perfectly suited to Jessica Chastain (if you forgive a few chapters that forget her entirely) and a stately untold true story, the film is more absorbing than its recent biopic contemporaries. Chastain plays Antonina Zabinski, the wife and corunner of the warsaw zoo doing the Nazi invasion of Poland. They devise a plan to smuggle Jews out of the nearby ghettos, using their Nazi-overtaken grounds as a hiding place. Over the ensuing months, the refugees and rescuers develop something of a familial bond. For most of the running time, the Jewish struggles are given as much emotional consideration as Antonina’s terrified caregiving, the scattered focus still coherent thanks to richly composed feeling.

Chastain as Antonina finds the actress still as invigorating to the audience even at her most reserved and introspective. In short time, she has become one of our most watchable performers and most versatile. While Antonina is perhaps one of Chastain’s more softly defined characters on the page, she implants a sharp emotional landscape that makes her just as fully realized.

Elsewhere, Johan Heldenbergh makes less of an impression as her husband despite chemistry with the star, and Daniel Brühl revives the Nazi we’ve seen him play half a dozen times, here while lusting over Antonina. Shira Haas is quite haunting (and nearly wordless) in one hell of a breakthrough performance as a sexually abused young refugee. 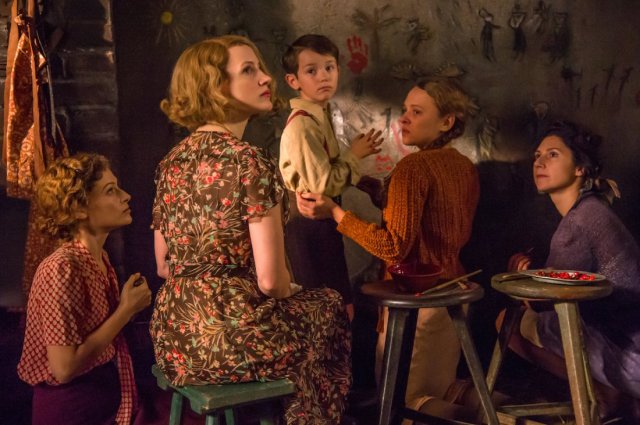 What mostly plays as a solid historical drama of expert craftsmanship flounders in its final act. The many threads of biopic, high-stakes drama, and respect for the dead make for a sluggish conclusion where no angle is satisfyingly fulfilled – least of which is the atrocities enacted upon the Jews. It’s not quite erasure, but it is an omission the film isn’t too aware that it is making, especially as Antonina’s story becomes so linked to their struggle in the film’s moral compass.

The Zookeeper’s Wife succeeds by it’s effortless tension and soulfully beautiful production value. Bina Daigeler’s floral and expressive costume design especially reflects the waning quality of life and the stress of Antonina’s performing for the watchful Nazis. The film captures something beautiful in a fraught film, even if it misses the big picture within its specific story.