When did Alexander Payne lose his ear for how people actually sound? Even in his archest satires like Election and Citizen Ruth, Payne’s cinematic voice had a realistic edge to make the most heightened emotion and biting commentary distinctly authentic. As his most recent features have given way to sentimentality that has made less and less room for that reality, now he actually steps toward science fiction – sort of. Downsizing is a high-concept attempt to return to satire, but with none of the attributes that made his best films so exacting.

As told in one long prologue, Norwegian scientists create a process to shrink humans to a fraction of their size in order to combat overpopulation and dwindling resources – known as the “downsizing” of the film’s title. Downsized colonies sprout up, allowing their citizens to live in luxury and ease now that their blue collar bank accounts have more mileage. There’s McMansions and raves, oversized booze and inexpensive diamonds to go with the backpatting that they’re also saving the world. Even though they’re combatting consumer culture, they are consuming more than ever. Get it?

The film eventually gets to its everyman Paul Safranek, a grey malcontent played with empty sincerity by Matt Damon. For Paul and his wife Audrey (a genuine and far more complex Kristen Wiig), Downsizing represents more than the opportunity to preserve the world, it allows them to escape the ceaseless malaise of their personal lives. The film ultimately becomes a quest of sorts for Paul’s spiritual and emotional fulfillment, the discovery that he’s just a small part of a bigger world (get it?). Or something.

Paul Safranek is a deeply unpleasant character to be spending upwards of two hours with, myopic in ways that are not compelling.

The ideologically muddled, unsatisfying arc for Paul is just one of the film’s significant problems. It’s not just that it remains unclear for most of the meandering film just what specific lesson Paul is supposed to learn, but also what we the audience are supposed to take away. By operating in the broadest metaphorical sense, the film becomes both vague and overly simplistic. It’s garish and dunderheaded both visually and in its representation at almost every turn. 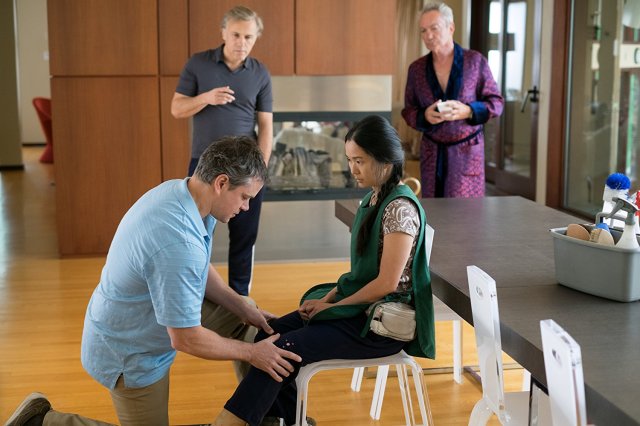 Most frustratingly, the film is often at its worst in how it handles matters surrounding the empathetic Ngoc Lan Tran. Downsizing pivots on her arrival, enamored by the most stereotypical particulars of her situation to cringeworthy effect. She is a maid in Paul’s building (serving a cuckoo Christoph Waltz, because of course he’s here), and has not been downsized by choice. To add to the treacherous visibility politics, Ngoc Lan is a partial amputee that speaks in stunted English and lives in a tenement far removed from the upper-class downsized community. By presenting her circumstance without nuance and often for laughs, Downsizing doesn’t comment on Paul’s white privelege, it embodies it.

However, Ngoc Lan does feel humanly rendered thanks to Hong Chau’s layered performance. Even as the film reduces her to gross stereotype, the actress works uphill for an emotional and winning performance. If she isn’t quite believable as an immigrant woman, perhaps its because of the demands she is working against.

This already sounds like too much mess for one film to bear, but there’s actually even more silly turns in store. While Downsizing is the greatest blemish on Alexander Payne’s career as a writer (returning here with partner Jim Taylor) and director, it’s depressingly so considering he is playing to some of his strongest qualities. Though it’s admirable for Payne for attempt something more conceptual, any goodwill is sullied by sloppy, hokey sentiment and offensive racial optics.

By going big, Payne has delivered something small-minded. Get it?