Returning from a long absence from the screen, Renée Zellweger is back and in her signature role for Bridget Jones’s Baby – and she hasn’t lost any of the magnetism or ability. Anyone cruelly focusing on perceived changes to her face is in for the rudest of awakenings: she’s still the same old Bridget, the same charming Renée.

Another in a growing line of sequels arriving long after their built-in sell by date, Baby is actually quite winning in how it captures the original’s appeal without irony or cynicism. First director Sharon Maguire returns (the second installment The Edge of Reason is wisely ignored) and every ensemble member is back, sans Hugh Grant’s Daniel Cleaver. Indeed, not much has changed and that’s all for the better.

But time has actually been kind to creator and creation. Bridget has gotten her shit together, advancing in both career and self-awareness, and her weight no longer an issue. Most surprisingly, her relationship with Mark Darcy has long since come to an end thanks to his uncompromising work schedule. While she isn’t driven by the same motivators as her first Diary, she’s doing quite fine, thank you. Enter the titular baby and confusion over the father to stir that up a bit – and Zellweger makes it all as enjoyable as ever before.

Here, the actress herself is unmarred by some of the unease and tension present in some of her work shortly before her break from performing. Baby may not call for the soul-searching depth of the first installment, but something is added to the equation as Zellweger is more free than ever before. Revisited characters often suffer from inconsistent characterization, particularly with such length between sequels, but nothing Zellweger presents defies the Bridget we know. It’s quite a joy to have her back. 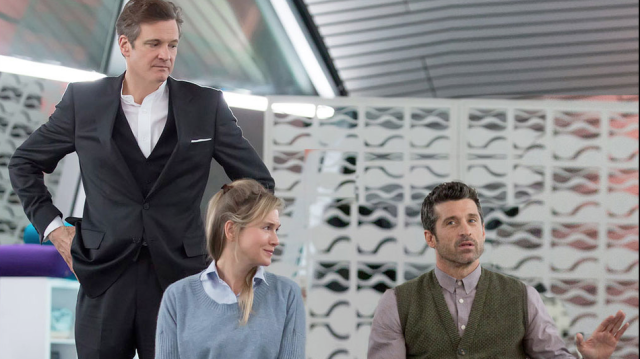 The baby daddy plotline works for delivering easy laughs and uncomplicated popcorn sentiment, but it does highlight Bridget newbie Patrick Dempsey as its weakest component. Dempsey’s potential father and partner to Bridget is all too perfect compared to the natural reality of Bridget herself, never more believable than the Ken doll the film basically asks him to be. By contrast, Colin Firth’s Darcy is more complicated than we’ve seen him previously – maybe while Bridget was going through personal growth, he was still frozen in his closed off shell. There’s still real chemistry between Zellweger and Firth while Dempsey just gets to wink at the camera, so don’t expect much tension in who Bridget will choose.

Every day, the romantic comedy is slowly dying another death as films for the masses become more cynical and ignore character and relationship. In the span of Zellweger’s absence, a modestly intended and sincerely composed romance that also satisfies became all too uncommon. Bridget Jones’s Baby is therefore a relief, an antidote to gloominess.