Something is unwell in The Wife, the Meg Wolitzer adaptation from director Björn Runge and starring Glenn Close as its titular enigmatic matron. Jonathan Pryce as her husband is a buffoonish novelist being awarded a Nobel Prize for literature, the result of decades of universal praise with Close’s doting Joan at his side. As the family heads to Stockholm for the awards ceremony, it unfolds a mystery about the nature of their partnership, one that cracks the facade of their supposedly picturesque marriage. Too bad we don’t buy any of it – not the initiating circumstances of the secret, nor any of its fallout.

Implausibility is The Wife’s most distinct attribute but its guiding force is its shear gumption to present all of its characters (yes, even the beleaguered Joan) in the worst possible light. Why does the film want is to hate its characters so much if it expects us to care? You get the sense of Wolitzer’s insight and wit being stifled by archness that can’t distinguish nuance from a sledgehammer. But The Wife doesn’t reach for satire either, it’s kind of grimly serious and with a wildly vacillating tone that defies its pretension. The result is a film about mostly insufferable people that’s mostly insufferably made, miring itself in a whole lot of bourgeois bullshit.

And we aren’t served the kind of return to form for the actress as the film promises at its launch. The film provides a playground for the worst of Close’s instincts, firing off exclamation points of mannered tics at the camera always as if she has something to prove but seldom something to say. At worst, Close’s histrionics have been divorced from any discernible reality, whether our own of that of her film’s. The Wife isn’t always showing the actress in that extreme, but the few genuinely believable moments are fleeting. But at this point, her natural gifts are being drowned in absurdly over-the-top antics. 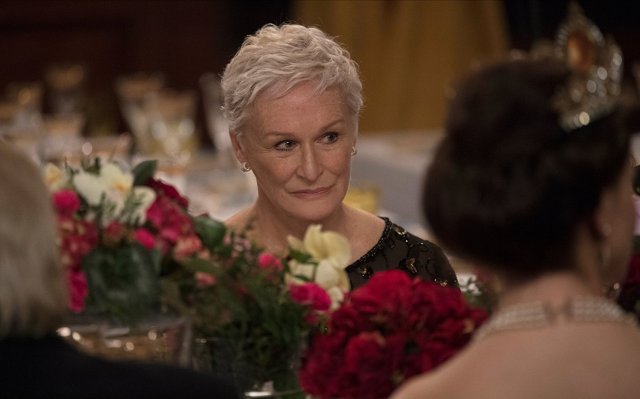 And yet, Close is maybe the most compelling thing about the thoroughly unbalanced film. While Pryce at least finds a wavelength to his characterization that is consistent, and Christian Slater is consistently dull as a prying journalist, the unevenness of her work at least tries to find something interesting among the overly manicured claptrap of the film. It’s a film that grossly underestimates our intelligence, delivering a flashback structure of milquetoast predictability and inconsistent perspective on its own proceedings. It’s a very loud movie to have so little conviction other than thinking its people are a bunch of jerks and morons. You crave humanity, and you snatch Close’s few sparks of such as if dehydrated.

Perhaps worst of all is the film’s flubbing of its gender politics, reducing Joan’s struggles down to oversimplified triteness. Joan and her husband Joe’s history is blandly rendered with empty talking points the film doesn’t buy. Her exploiter cares for her more than the film itself. In the end, The Wife pisses on your leg and tells you it’s raining.