This year’s Cannes Grand Prix winner, Robin Campillo’s BPM (Beats Per Minute) is a staggering film. Detailing the Paris branch for the Act Up movement during the height of the AIDS epidemic, Campillo and his sprawling ensemble make the most humane film of the year in a year full of them. Embodying a spirit of activism that makes BPM an urgent and timely piece of filmmaking, there is hope in the act of resistance.

That sentiment is putting it mildly for the multitudes that BPM contains. Campillo is intellectually ambitious with the film and exacting in the breadth of what he achieves. It is a film of human beings that love one another, that bicker over crucial nuance and maneuver group dynamics. Human beings that protest, dance, fuck, and that live joyously and die unceremoniously. The outside world is cruel, but in here the water is warm. BPM is a masterpiece.

Campillo’s has an eye on the film’s citizens that puts the audience right in the middle of their action. Taking in the entire room during its meetings and having several vantages during their protests, the camera turns us into a participant in the action – eyes darting between debaters, dancing along in the crowd. When they mobilize, the film is tensely wrought with the stakes present in emotive and sometimes reverential ways. But Campillo still makes room for less dire human traits, blending humor and flirtation throughout. This is not a passive viewing experience.

But for Campillo, the individual is as essential as the group. Eventually the film does narrow in on the casual romance between pos Sean and neg Nathan. As Sean, Nahuel Pérez Biscayart gives an immense performance, prickly in his cruelty and heartbreakingly real. Arnaud Valois is engaging despite Nathan’s soft-spoken disposition, with an ever-present undercurrent of sadness. Their sex scenes are awe-inspiring for their unexpected emotional beats and particularly impactful for how they surprise, interplaying with the ghost of sexual partners past and sex as its own proof of life. 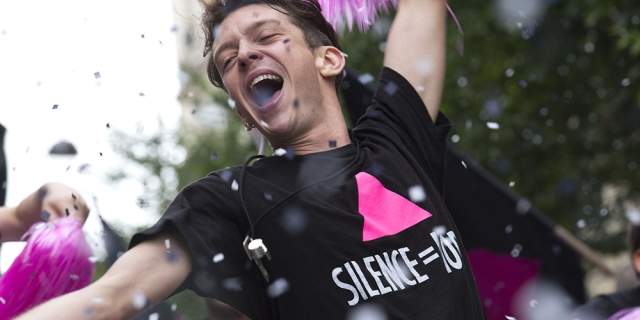 The film is insightful on both the macro and micro level. From the wider social implications of an unjust system down to visualizing the cellular biology of the virus, the film makes time for the cosmosology of the AIDS crisis from all angle. The group itself is an organism, morphing as members are gained and lost, adjusting to the new limitations thrust upon them and striving for further gains. The real beauty is in the middle ground, the human experience that Campillo captures with an authenticity that keeps the film deeply personal. The cyclical life lived between political disruptions, relationship shifts, and celebration.

It’s a film quiet deaths and life out loud. Not settling for tragedy despite its copious pain, BPM is an enervating experience for how it demands your attention and compassion.